Symbaroum, by the publisher “Järnringen” (“The Iron Ring” in English) is a fantasy game that’s been about for a couple of years, but I only came across it for the first time a few months ago.  I didn’t come across it through an impromptu game ran by a mate or at a convention: I came across it by the strength of its artwork!  It just drew me into Symbaroum’s dense pages, evoking the setting and feel of the Symbaroum world so perfectly, I was just blown away.  I mean, just look at this artwork, and I dare you to tell me it ain’t nothing short of brilliant. 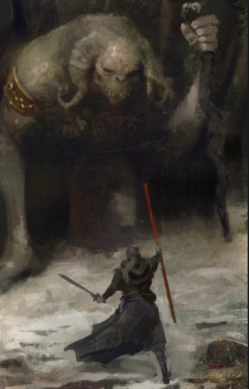 I couldn’t wait to venture out into this world and, more importantly, push my players out into it.   So I bought it, read it, created my bit of it, and played it!

Hot damn I love it.

But I guess that’s not enough!  Let me explain…

I read through the Core Rulebook, and on that first read I couldn’t help but draw parallels with the Fifth Edition Dungeons and Dragons that I’ve been playing down my local pub (I hadn’t played D&D (in fact AD&D) since about 1990, so was interested to get back into it as a game three decades on).  Some of these parallels seem obvious on the face of it, but a more detailed look quickly reveals the reality:

I haven’t even mentioned the setting yet, for which there is a mountain of rich setting material. I’d originally thought I’d set my campaign in Thistle Hold.  I bought the supplement “Thistle Hold: The Wrath of the Warden” on the recommendation of my mate Rich: I don’t regret getting it for a minute, but I’m not using it (at the moment).  The scale of the world and all its empty spaces were just begging me to create my own bit of it.  So Granite Hold was born, the once prosperous outpost on the shores of the lake called Korinmere, that soon fell into decline and struggle, despite the hundreds of Ambrians and Goblins who’d planted roots this far north-east, and have no intention of giving up the lives they have carved for themselves…

Having played the game I’ve now picked up a few points that deserve greater examination…  I’ll take a look at these in my next Symbaroum article, and cover the use of Powers and the dastardly influence of Corruption too…