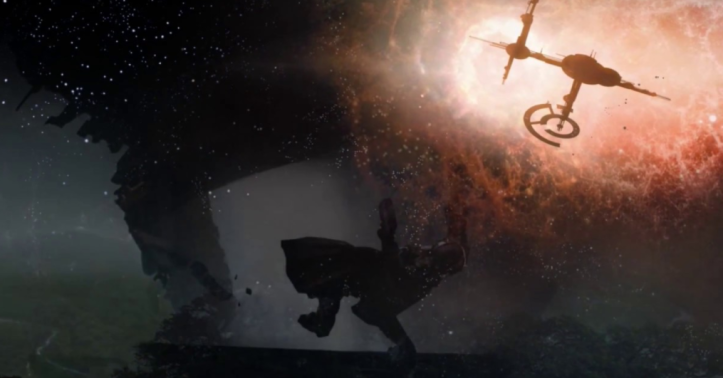 Yaphet was sure: the bullet had his name on it; it was bang on the bullseye; he was about to die. He closed his eyes for the last time, his life flashing through his mind: it was a troubled picture, and it was short.

The pain didn’t come. Yaphet heard the whish of a bullet pass by his ear, heard the zing of a ricochet off the ornate brass lamp hanging from the wall behind him, heard it crash to the floor and the quiet “whump” of a fire bursting freely into life.  In the fraction of a moment that followed Yaphet felt something around him, with him, protecting him.  He couldn’t see it, or hear it, but he felt it, felt the hand of the Beast saving him for better things.

He fell to the ground, his eyes tight shut but mind and soul more open than ever before.  It was all so clear now.  The book his old friend Mannen, from all those years on Karrmerruk, had given him now made complete sense.  Yaphet had liked the tales, the proverbs, the teachings Mannen had tried so hard to pass on, in whispered voices and darkened chambers. But back in the day he hadn’t really got it: hadn’t really understood the sacrifices made, the selfless destiny of Nazareem, the things the Dancer demanded in his form of the Beast, the things the Beast promised to the faithful.

But now he did.

Lying prone on the floor of that Coriolis spice bazaar Yaphet opened his eyes on a world that was new, in almost every respect.  And the Beast had made his point clear.  Yaphet understood, and knew he had to do something about it…

The end of the last scenario in the Mukafa’a campaign saw Yaphet survive a roll of 66 on the  critical hit table, thanks to his Dancers Talent and the intervention of the Beast.  I had been thinking a little bit about Nazareem’s Sacrifice as Yaphet had been tinkering with that theology.  But now he’s totally committed to it I had to take the time to really look at what the book said, what this might mean for the objectives and hopes of Nazareem’s Sacrifice, and what influence this would have on Yaphet.

Nazareem’s Sacrifice was a Firstcome faction that worshipped the Dancer, but in that Icon’s alternate aspect of the Beast.  Many believe that the Beast represents mankind’s deepest, truest nature, of inherent evil and power through strength, and the extreme idea that to achieve perfect beauty you must be free of any morality; absolute nihilism – reflecting the accepted perception of the First Horizon at the time of the portal wars – was a given.  Rumours abounded that Nazareem’s Sacrifice practiced human sacrifice, performed dark rituals, and made unholy alliances with evil spirits and djinn.  If the rival factions in the Third Horizon needed any more reason to hate Nazareem’s Sacrifice, these rumours gave them ample ammunition.

This all sounds fine I suppose, but so far so psycho.  For me it conjures images of psychotic bio-sculpting experiments and utter brutality, something out of the Saw movies – chaotic evil in perhaps its truest sense.  I’ve played a psychopathic character before, and while the freedom this offers is fun, ultimately it makes for a pretty shallow roleplaying experience.  I wasn’t too upset when ‘Stonewall Jackson’ died at his own hand, critically failing to lay some explosives, and I didn’t want to go down that route with Yaphet – his faith in the Beast is a more complex and nuanced creature.

So what might this “search for perfect beauty” actually mean?  And what might it involve?  Are we talking about Nishka in Firefly, and his adherence to the teachings of Shan Yu?:

“Live with a man forty years, share his house, his meals, speak on every subject.  Then tie him up and hold him over the volcano’s edge.  And on that day you will finally meet the man.”

This idea works brilliantly in Firefly, but I don’t see Yaphet as a young Nishka, torturing people willy-nilly for some pseudo-scientific purpose (but in fact just for the psychotic fun of it).  Maybe the most extreme accusations – human sacrifices and the like – are just that, made up stories to turn the people against the faction – but who knows what Nazareem’s Sacrifice really got up to in hidden cloisters and behind closed doors.  But Yaphet doesn’t subscribe to these extremes – to his mind his objective here is really scientific, rather than pseudo-scientific – but, he is obedient to the Beast, so while he won’t go out of his way to find harmful methods to further his studies, he won’t shirk from them either when the science tells him it’s necessary.

But back to Nazareem’s Sacrifice: the faction’s adherents believe this nihilistic and brutal search for perfect beauty will open the doors to unfathomable powers, so perhaps it’s little wonder they would seek out this knowledge.  They were one of the few factions at the time of the portal wars who truly understood the portals, at least as well as the Foundation or the Order of the Pariah.  Perhaps there was much envy and fear in the Third Horizon about the knowledge and power of Nazareem’s Sacrifice, based on purely political reasons.  Perhaps the portal wars simply gave the Order of the Pariah and their fair-weather allies the pretext to destroy a faction that might rival their dominance.

I love the idea of the powerful factions concocting a bogey-man myth to demonise a rival and justify military action to remove that rival.  The fact that the behaviour of Nazareem’s Sacrifice gave the Order of the Pariah plenty to work with is neither here nor there, and I’m not trying to say that the Third Horizon isn’t a better and happier place without Nazareem’s Sacrifice.  But perhaps their enemies saw a golden opportunity and took it.

But whatever the reason, whether it was the righteous cleansing of a beastly organisation, or a political quick-step to eliminate an economic, military and theological rival, or a mixture of the two, Nazareem’s Sacrifice was ruthlessly destroyed during the war. They were portrayed as the lackeys of the First Horizon and were surely seen as traitors to the Third Horizon – certainly, it doesn’t seem that many in the Third Horizon mourned their passing. The Order of the Pariah led a loose coalition of other factions, including the Draconites and – perhaps most tellingly – the Legion, and hunted down the devotees of the Beast.  The decisive battles were fought in Odacon, where Nazareem’s Sacrifice was finally defeated and scattered to the far reaches of space.  The portals to the First Horizon were closed, sealing them off for good, and bringing victory to the Third Horizon.

But the faction hasn’t passed entirely into the history books.  It lives on, in hiding, in valleys and woods, dark city streets and behind the veil of respectable business and communities.  It may not be strong, and it may be scattered far and wide, but the worship of the Beast survives, and one day Nazareem’s Sacrifice will rise again and take its revenge.

So, what does all this mean for Yaphet and his relationship with the Beast?

The book says that the Dancer is seen with a sweeping shawl, and welcomes sacrifices of an exquisite meal, a dance or a song.  The book also tells us that the Beast is represented by a dragon-like creature with fur and nine eyes. I’ve said before that Yaphet’s dance to the Beast is akin to the Haka, an aggressive war dance that challenges our enemies – this feels right to me, although there would be some terrible, ironic black humour in an elegant or gentle dance form to worship such an Icon.  I also see the Beast as humanoid, with the reptilian features of a dragon, terrible claws and an array of black eyes, large and small, not dissimilar to those of a spider.  The Beast cloaks his form in an exotic animal-skin caftan and dupatta instead of a sweeping shawl (Yaphet needs to get those!).

What does Yaphet’s devotion to the Beast tell him, or inspire him, to do?

Well, the idea of revenge against the enemies of Nazareem’s Sacrifice must be up there.  And surely, Yaphet needs little prompting to nurse a grudge against the Order of the Pariah – they did take him as a slave; they did oppress him; they did order his death.  But it’s not just the Zalosians who are ripe for the Beast’s vengeance: not only are the Draconites and the Legion legitimate targets, but also the Black Lotus assassins from Ahlam’s Temple were tireless in their pursuit of the Nazareem Sacrifice’s leaders, and there’s a special place in the Beast’s dark domains for them.

But Yaphet is an engineer, with an insatiable curiosity to see how things work, and make them work better.  He won’t go out of his way to cause needless harm in doing so (unless that’s harm to the Beast’s enemies perhaps) but considerations of morality, fairness and justice won’t bear on his conscience if the ends justify the means. His time awake in portal space gave him an insight into that dimension, and now he must learn more about it.  He must learn enough about the portals to find – and re-open – those gates to the First Horizon.  Then, and only then, can the wrongs of the portal wars be put right…