After the episode with the drones the Spectral Corsair limped slowly towards Thrun in the Nagar system.  Despite the loss of most of their cargo they had managed to retrieve three of the ice consignments so the trip wasn’t a total loss.  The 30,000 Birr they made wasn’t a profit, but at least they had some capital to play with.

Abdelacar messaged Jubal to report the death of Sara Qajar, but in his version there was no mention of the infighting in the crew, but instead she died fighting the drones, saving every one of them.  Abdelacar also sent Jubal the details of Fakir Sulamen, the trader on Sadaal who had sold them the drones, in case he knew anything of this man: and a message to the space station in orbit at Hirmus – the original destination of the deadly drones.

Once in port on Thrun Malina their new Engineer set to repairing and servicing the battered ship.  The total cost sucked up half their working capital and would take nearly five days to finish off, but it had to be done.

On the first day they received a visit from an ornately dressed and elegant man with three bodyguards.

“I am Sima Subadar and I’m here to collect a shipment of timber I believe you are carrying for us…”  But it was immediately clear to this man that the cargobay of the Corsair was severely damaged.  “I trust,” he said slowly, “that all is in good order…?”

But obviously it wasn’t, and Subadar’s demand of 7,500 Birr compensation – on top of the 7,500 Birr already paid to Hanbal and the crew – was too much.  Hanbal’s counter offer of 1,000 Birr as compensation was taken as an insult, and the ship was impounded immediately: House Subadar, it turned out, controls the ports and customs on Thrun.

But Subadar was not an unreasonable man, and hinted that there may be another way they could compensate him… The Harem Moons of Thrun in Nagar

The planet Thrun has three moons, the so-called Harem Moons, where the beautiful young women and men of each House are raised and trained, ready to be chosen as wives, husbands and consorts at the annual Tacloban Harem Bazaar.  The first moon, Thrunmabar, is a hot and windy place, and home to the Harem compounds of many famous Nagar families, Subadar included.   The second, Dorkar, is a dry and cold place, covered in salt deserts that whip into deadly storms, where Houses such as Menindee, Bintulu and Cobar were based. The third is Tacloban, a rocky planet housing the Tacloban Bazaar, and a planet readying for this year’s Harem Bazaar, due in a week.

Sima explained that this year they had received word that the Crown Prince of Sadaal, Surin himself, would be attending the Bazaar to choose a new wife for his own Royal Harem.  The most beautiful woman, and sure to be selected, was Pernalulu, House Subadar’s most wonderful offering.  There was only one thing that could prevent this, and that was a young Bintulu girl called Caiguna…  Rumour had it that Caiguna’s beauty was even greater than Pernalulu’s, but if Caiguna somehow misses the Bazaar she will have to wait until next year for selection…

“She doesn’t need to be hurt, you understand?” Sima said.  “Just needs to miss the event.  If you succeed we will not only consider your debt paid in full, but House Subadar will owe you a debt of gratitude.”

No shit!  If House Subadar gets one of theirs as the wife to the Heir of Sadaal then there is no limit to their future.

“But, if you fail, or get caught, then no word of this conversation is ever breathed again, you understand?  If you betray our trust in this venture we will hunt you down and see you all dead.”

It seemed like a good proposition, and as soon as they had repaired the ship they headed off to Dorkar.

Go to the Bintulu compound and present themselves as representatives of a powerful interested party, to review the men and women of the renouned House Bintulu and make recommendations to their master.  Abdelacar would play the role of chief adviser, with Hanbal and Norsa his own personal entourage.

Once they were in they would administer a potion that would make Caiguna ill and stop her going to the Bazaar on Tacloban.  They had come across a great stroke of fortune, with the Icons smiling upon them, when Abdelacar happened across an old friend and former co-worker under Jubal, a apothecary called Arib Tafik.  Tafik could help them, but with the time and ingredients available he couldn’t be sure exactly what his concoction would do.

“Make it more potent, rather than less, if you can’t be sure,” said Hanbal.  When they received the potion they had two vials, each containing two doses.

The Bintulu Compound on Dorkar 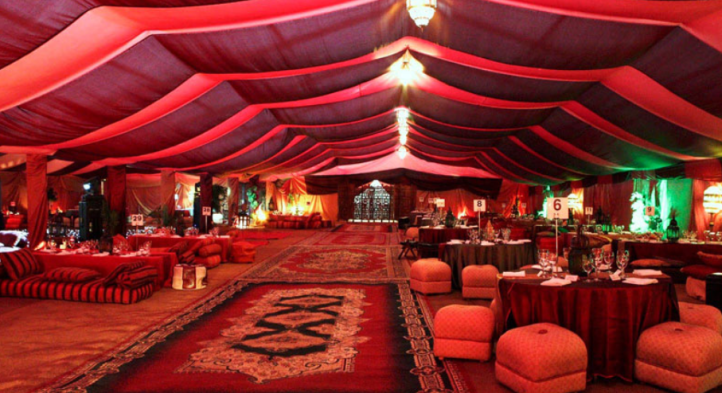 And the Bintulu Harem Greeting Marquee

Arriving on Dorkar they landed inside the protective ridge of rock that surrounded the sandstone walls and colourful tents of the Bintulu compound.  And just in time as a salt storm was brewing.  Welcomed with other prospective buyers they were led through the compound before they entered the main tent.  And here was Caiguna and all the other Bintulu Harem men and women.  Abdelacar immediately made for Caiguna but she repelled his clumsy attempt to ingratiate with her.  Hanbal stepped in to try and repair the damage, and was surprised when she seemed to like his no-nonsense and man of the people approach.  Eventually Hanbal convinced her to take a drink from his glass, but not before he’d had to take a sip himself.

The double-dose of potion that had been in Hanbal’s hand had been slipped into the drink, and he watched Caiguna closely as she sipped as he had done.  Almost immediately Caiguna began to retch, the poison taking effect.  Hanbal wasn’t feeling well, but he was shocked at how quickly Caiguna fell to the floor, blood-speckled spit foaming at her mouth.

His words to Tafik echoed in his ears: “Make it more potent…”

There were shrieks and cries as the place erupted in panic.  In the chaos Hanbal, Abdelacar and Norsa fled through the crowd, as cries of “SHE’S DEAD!  SHE’S DEAD!” wailed behind them.  Well, House Subadar’s girl had no rival now, that was for sure…

It was then that Hanbal fell, the poison taking hold of him in the way it had Caiguna.  Norsa grabbed his stricken captain and carried him back to the ship, but Hanbal couldn’t be revived.

The Captains’ Curse had struck again, and for the second time the Captain of the Spectral Corsair was dead…

Ouch.  As if we didn’t know that crits in Coriolis are bad.  I used my rules for poisons (see my blog post “Coriolis: Poisons & Explosives (oh, and Stuns…)” dated 10 September 2018) and gave the potion made by Tafik a damage and crit value.  As Hanbal had put both his doses into his drink I’d already decided that anyone drinking it would be attacked twice.  Hanbal resisted the first dose, but second time around the poison critted him.  A roll of 66 on the crit dice meant that something in his brain popped and Hanbal was dead before he hit the dusty floor of the Marquee.  Sorry Tony….. But now he’s thinking of rolling up Sister Mariam as a player character, and throwing his player-self in with Ahlam’s Temple…

Talking of Tafik: this was another good use of the team’s Group Talent, A Friend In Every Port.  I love this talent but as a GM it does start to feel a little bit repetitive when they literally have a friend in every port: the talent is an excellent plot device, but I fear it might get a bit stale.  As GM I need to have a think about how this talent can be used a bit more imaginatively.

Finally, the costs of repairing a ship module.  In the rules you make a Tech roll and use up a spare part and ‘hey presto’, the whole module is fixed as new.  So, according to this it takes three spare parts (a total of 600 Birr) to fix the dreadful damage that the Corsair took (a destroyed cargo bay with its doors blown off, a destroyed Ion Cannon bay and an explosion in engineering that had taken out the ship’s Service Station).  That doesn’t feel right.  So I made up a few House Rules for fixing destroyed modules, which I will post immediately after I’ve posted this!