The crew of the Spectral Corsair, now running under the official registration of “Valley Forge” (thanks to their new Legion pay-masters) have been on Coriolis running covert intelligence operations against the Zalosian presence, working – for good or ill, who knows? – from the Samaritan Sanatorium.

Following their good work investigating Brother Asculum the crew of the Corsair chose to focus their attention now to Sister Mariam, the Zalosian priestess who frequently travels to the Cellar on Coriolis, the depths that houses the underclasses of scum and villainy.  She ostensibly went to seek out poorly and needy people whom otherwise would never get any help: the so-called Untreatables.  But the Legion didn’t believe a word of it. 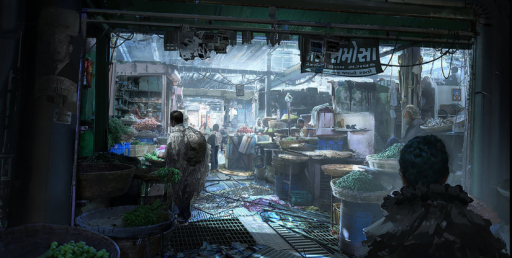 Sister Mariam and the Markets area of the Cellar

After a long wrangle (aka negotiation) with the Legion guards at the lift to the Cellar, they finally convinced them they were entitled to free passage and help, and Captain Taba, Sergeant Salah and the guards finally co-operated.  So now they could start tracking Sister Mariam.  Eventually, after many long hours hanging about and trying to look inconspicuous, Fenwick finally spotted Mariam as she left the Samaritan Sanatorium with two acolytes.  He picked up her trail, and tried to covertly follow her, relaying her position to the others waiting ahead.

Thinking ahead Fenwick had put together a tracking device and placed it in Ajit’s hand. As the crowd thickened Ajit wove closer and closer to Mariam and her men.  At the moment they boarded the huge lift, all metal struts, oil, turning wheels and chain doors sliding by one another, and when the throng was at its most dense, Ajit took his chance: he slipped the tiny artefact of technological artwork into the folds of an acolyte’s hood. And that was a good thing, as the Cellar was a warren of corridors, tunnels, chambers small and large, and rolling staircases going up and down all over the place. And people. Many, many people… 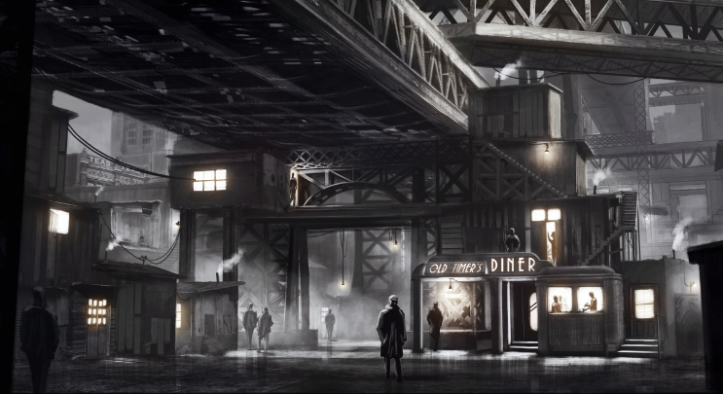 A less-crowded part of the Cellar, in the lower levels

Their surveillance of Sister Mariam and her companions went very well, thanks to the skills of Ajit and others, and the clear beacon signal from Fenwick’s tracker.  All was going well, all was good.  With one exception: Norsa constantly complained, complained that he wanted to visit the Sewers, the renowned casino, arena and social highlight of Cellar life.  Eventually he listened to Hanbal’s patient insistence that they focus on the job in hand, but was still bristling when Mariam and her men eventually stopped in a dark and shadowy chamber.

It was a strange place, with a half-barrel fire smouldering in the centre and people hunkered down around the walls, their worldly belongings in bags, boxes or worn on their backs. It smelled of poverty, but not despair: these people were coping somehow, even with the terrible conditions and disease.

But Mariam didn’t seem so interested in them.  She was approached by three other men, dressed in dark and flowing robes, and they engaged in a close and muttered conversation.  The crew all took up covert positions, close enough to witness the meeting but not close enough to spook Mariam and her acquaintances.  All, of course, except Norsa.  He didn’t try to hide his presence at all (hard for a Nekatra, after all), and the three men – seeing this beast in the half-light – decided to leave.  But Norsa wasn’t about to let them, stood in their way, barring their route out.  But these men were not to be messed with, and a quick shot blew a hole through Norsa’s arm before he could strike a blow: Norsa fell, his blood spraying into the air.

The sudden noise shattered the veneer of calm in this place where casual violence and death lay just beneath the surface of civilisation.  Mariam and her acolytes immediately fled the place, as the three be-robed men calmly walked away from their dying victim.  Ajit followed the three men as Hanbal and Fenwick stepped from the shadows and offered themselves as protectors to the priestess of the Icons, so suddenly lost and afraid in the spontaneous violence of the Cellar.  Mariam didn’t listen or stop to talk and they all formed a strange group of people fleeing through the crowds back to the lift.

Ozgare and Karter sped to Norsa’s side.  His elbow was shattered and plasma and blood was pumping into the dirt.  Their desperate attempts to help him managed to stem the bleeding and save the Nekatra’s life.  But Norsa’s arm was destroyeded, and had to be swiftly removed to save his life: a heavy price to pay, but at least he would live to fight another day.

The three men quickly spotted Ajit’s pursuit, and turned to hunt him down.  But Ajit is not the best sharp-shooter in the Third Horizon for nothing: he fled only to draw them on, and emptied his magazine to put two down dead and leave one fighting for his life. As Ajit went to tend to the third, wounded, man a figure stepped from the shadows and offered him a card, that read: “Corrections, Retrievals, Problems: call Mhyrie”, and a number.  A husky voice said: “sharp work – if you ever need a job…” and then the figure was gone into the gloom.  With a bemused but slightly intrigued shake of his head Ajit stooped to save the life of his third victim.

Back on the lift to the Core of Coriolis they all seemed to share the same sense of relief.  Mariam still refused to acknowledge them, looking to all the Horizon as if she were in shock and protected by her acolytes.  As they reached the top, and the great metal shutters rolled back Ozgare tried a last ditch effort to salvage something, some evidence from this debacle: he tried to read Mariam’s mind, his mystic talents reaching out to probe the woman’s thoughts.  His probe was immediately rebuffed, and his mind was assaulted.  Ouch that hurt.  And as Mariam quickly stepped off the lift and disappeared into the Coriolis throng her eyes met his.  Then she was gone.  But now Ozgare knew two new things:

First, that Mariam was a Witchsmeller, no doubt of that;

And second, that she knew that he knew…

An interesting game that took a different turn from that which I’d anticipated, thanks to Norsa’s inability to do anything quietly!  Suddenly the team were faced with having a bit of a fight, but not with the key antagonist and with little chance of finding out anything useful to progress the plot!  At least Ozgare kept trying, right at the end of the session, and I was able to let them know she was a Witchsmeller!  Phew – I now have a really wide range of options for the next scenario, and just about all of them in the hands of the players.  Just how I like it!

Norsa’s decision to break the rules of the mission, and openly just give the three men a hard time, was: not out of character for the player in question!; was not what the rest of the crew or Norsa’s captain wanted; and was a rash and risky thing to do.  So risky, in that once he was shot I felt it was appropriate to go with the crit roll when he was shot.  A d66 roll of 55 gave him a severed artery in his left arm, and a Medicurgy roll with only 1 success meant he would live, but with a complication: that complication was that they had to amputate his arm to save his life.  Harsh?  Perhaps.  Justifiable as a GM?  Certainly.  Will Norsa learn any lessons?  Lol…

The last thing to mention is, as GM, I’m not certain the new direction the campaign has taken is really hitting the player’s Coriolis vibe.  It might just be that this scenario, that i wrote as one session, is now turning into at least three sessions.  Also, there are divisions in the crew, with some ultra-loyal to the Legion, some seeing them as a necessary evil, and some desperate to rebel against the Legion yoke.  I think that next time we need to test those loyalties and offer another way ahead, a Third Way…