The Spectral Corsair: Episode XIV Part 1 – “In Space No One Can Hear Your Cat Scream”

Calumet City was abuzz with gossip about the fight, gossip about the Witchsmeller that had been in their midst. The people in the city took it as an opportunity to have a go at the Zalosians on the planet – there had been a growing unease about the Order of the Pariah’s expansionist plans in Odacon.  Zalosian acolytes and sympathisers were targeted, some were killed, most fled.

Against this backdrop Bubaga Tamar, one of the Triumvirs who control Calumet, and the leader of the Salvagers conglomerate in the system, visited the crew on the Corsair. He had recognised Ozgare’s attempts to communicate with him, and felt some sympathy for them.

“Normally,” he said, “a breach of the peace in the city would carry the death sentence for those involved. But the Triumvirate has heard testimony that she was both the aggressor and a damned Witchsmeller, and we are quietly happy to have had the excuse to clean out some nests of Zalosian scum.”  He leaned in closely, then murmured “and Resim Aldair is a name you should speak with caution in this city…”

Resim had arrived in Odacon a year before, and approached the Triumvirate to seek permission to run salvaging operations in the system.  The Triumvirate said no.  But Bubaga made a covert arrangement with him behind the backs of the other Triumvirs, for a share in Resim’s salvaging spoils.  The other Triumvirs learned of the deal and dispatched a detachment to stop Resim.  They found him near the Ash Belt, in orbit around Odacon’s binary black hole called Raeb, and left him for dead.

He was forgotten, until several months later when he re-appeared in Calumet, selling some magnificent portal builder artefacts and relics.  The Triumvirs couldn’t let Resim operate unchallenged, as they had spread the story of his defeat and death as a warning to others who might want to loot the system. But the truce on Sharma held sway.  Again they sent a detachment after Resim as he departed, but this time the detachment sent to kill him never returned.

Soon after Bubaga’s visit Abdelacar came to escort them to meet Resim. They rendezvoused in deep orbit with a class 5 salvaging vessel, called Khanfasar.  They landed the Corsair in the ship’s main hanger, and headed for their destination: a base in orbit around a small moon deep in the Ash Belt, flying directly to avoid the portals – too many Legion ships, too many pirates, too many Zalosians…

The journey took two weeks, and while Hanbal and the crew were treated as honoured guests aboard Khanfasar it was clear they were being managed. Ajit used his talents of infiltration to scout the ship in the guise of a crew member. Khanfasar was a battered and old ship, and a design that was unfamiliar to them. In fact, the design was so old-fashioned it finally dawned on them that it was a Second Horizon design from the time of the Portal Wars.  Also, the way the crew was treated was very strange, and most had some scars and dis-figurements. Ajit experienced this first hand – whilst scouting he was challenged by an officer, couldn’t answer her demands and was disciplined by a swift gash across his face, leaving a deep scar… He wasn’t uncovered as one of their guests though.

They eventually arrived at the base deep in the Ash Belt, a hollowed-out asteroid orbiting a barren moon hiding in the debris of the Belt. As they approached they could see what looked like a portal, shimmering in the same orbit as the moon. No one knew there was a portal here, and they said so. Abdelacar smiled knowingly:

“We are, shall we say, working on portal research. This portal was a remnant from the wars, and we are seeing if we can re-vitalise it…”

Hanbal and the crew went along with the flow, focussed totally on tjeir mission for Jubal: find Resim,  hand his cat back, convince him to return to Kua.  None of these clues, none of these hints, seemed to spark any suspicion within them, but they were wise enough to come armed. Khanfasar gingerly negotiated the narrow tunnels and channels in the depths of the asteroid, before they found a central chamber with a station built into the rock. They were soon taken aboard, escorted though the complex and into a Great Chamber. This chamber was large, carved into the rock, with a small central amphitheatre and heavy drapes across one long wall. Full of people, lounging and reclining – Resim’s entourage, so it seemed – with a small group of scientists hunched over computers, papers and data discs in one corner. They were beginning to get the sense that something was badly awry, and the phrase Nazareem’s Sacrifice started coming to mind…

They finally met Resim Aldair, but he was not what they had expected: terribly scarred and battered from multiple wounds, half-robot, half-man, with cybernetic arms and four spider-like cybernetic legs, and metallic structures all across what remained of his body. Karter looked on appreciatively, his cyber-addiction kicking in. 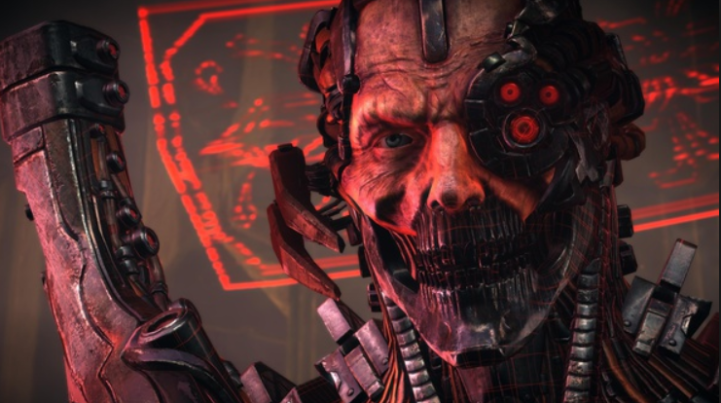 Resim approached and stood at his place, a plinth on one side of the amphitheatre.

“I may not be as you may have assumed.  But life in the Ash Belt can be hard.  I have seen things you people would not believe, and learned things you people couldn’t hope to comprehend.  But, now you are here.  Say your piece.”

“That cat is not mine,” he finally said.  “It is my daughter’s, and its presence here is clearly a threat from Jubal, through you, against me.  That, and the fact you brought the Witchsmeller Alina almost to my door makes me question your motives.  The Zalosians are trying to find me, trying to stop me in my destiny, to re-open the portals and restore the Third Horizon to the old ways.  If you wish to build any trust, you must kill that cat immediately.  Do it now.”

To say the crew were stunned would be an under-statement, and there was no agreement between them.  Hanbal and Ozgare were aghast at the prospect, Fenwick and Karter were ready to kill the cat as ordered. An argument ensued but Resim instead offered the chance for one of the crew to entertain him by fighting in the arena.  Karter agreed, but was quickly defeated by his opponent and was left bleeding and broken.

It started to dawn upon them that they had walked into a situation that was nothing close to what they had expected.  Had Jubal been playing them from the start?  Had Jubal known that Alina was a Witchsmeller?  Were they just pawns in some bigger play, to be crushed by events?  Abdelacar could see the way Resim was going, and was shocked by his transformation in the time he’d been away.  And Hanbal and the crew were his friends, had saved his life: a pathetic death in this place was not fair for them, was not acceptable.

They chose to fight back.

Shots rained down on Resim, and he called forth a creature from the dark, an enormous Byara tore through the drapes and landed in the chamber, ready to defend its master. But it was too late for Resim, and he fell dead to the onslaught.  The place fell into chaos.

Fenwick attacked the scientists, shooting one and then turning his fire on the computers themselves, having grabbed as many data discs as he could. They got Karter back to his feet, grabbed Resim’s body, and started a fighting retreat back to the Spectral Corsair…

I had expected this scenario to be the culmination of this campaign arc, and there were a few ways the scenario could conclude:

–     I’d thought they would pick up the clues that they were walking into the clutches of the Nazareem’s Sacrifice much earlier, and that this might shape their plans. But it was only once they were in Resim’s presence that this really hit them.

–     I’d also considered the possibility that this might become a great finale, if they decided that the danger of the portals being re-opened, and the threat of the portal wars re-starting, was so great they might do something selfless to stop it – maybe even sacrificing themselves.  But no.  They don’t seem to give a monkey’s chuff about a new portal war, and Ajit was even keen on the idea (on the basis that, as he’s an assassin, war is good for business!).

But, I’d mis-judged how long we would take (in real life gaming time) to get to the scene with Resim, so we ran out of time to finish the scenario, and this part of the campaign.  Never mind.  We will finish it next time, with the only disappointment being that Morgan (who plays Ajit) won’t be able to join us…