The Spectral Corsair: Episode IX – The Ajit Mehr Story, “For The Love of a Beautiful Girl”

As regular readers will know, one of my players is at university so misses a few games whilst he is away.  This is his story, while he was apart from his crew…

Ajit Mehr, spy, assassin and some-time member of the Spectral Corsair’s crew, watched from the airlock port hole as the Corsair’s engines flared in a burn and the ship, his ship, accelerated away from him. A pang of regret gripped him for a moment, before he turned to his charge: Tayisha, a Child of the Catacombs, one-time Augur for the Zalos Witchsmeller Covenstead of Phokaas. But now on the run and hunted by those very same Witchsmellers for the crime of heresy, for fleeing Phokaas and revealing the Witchsmeller ideology for the blood-thirsty and politically-driven theology it was. And Mehr had agreed to see Tayisha safe. He knew not when he would see his friends once again.

But no matter, Mehr thought, as he settled alongside Tayisha and her servants, the hand maiden Mallisa, and man-servant, Sennath. They were travelling deep into the Mira system, destination unknown to Mehr. The boring hours of travel were filled with listening to Mallisa tell stories of the Catacombs, and Sennath playing his various instruments – beautiful music, almost as beautiful as the stunning Sennath himself…

But whatever Mehr had anticipated, he hadn’t expected to awaken from stasis after the jump to Antmira, abandoned in the desert a couple of miles outside a small city sitting atop a high-cliffed plateau. But he was not alone – Sennath was with him, looking equally surprised. Mehr was confused: he was left in the desert, his gear was all here, but no ship, no Tayisha. A holo-message filled in the blanks, as the image of Tayisha materialised and spoke in loving and quiet tones to him:

“Ajit, my friend. I am sorry to leave you like this, but I am in danger in Mira and don’t want you to be tarred with my taint. I need you to be free to act without looking over your shoulder.
The Witchsmellers will inevitably have tracked us here. Their centre of operations is here, in Einekkeh City, led by a so-called loyal adherent of the Church of the Icons, the Magister Ruta Souban.
This is where I need your love and loyalty, to end the reign of this evil heretical tyrant and murderer. Ruta will be easy to find, not so easy to eradicate. Act quickly, strike swiftly, before she learns we are here. My faithful servant, Sennath, will help you in every way he can.
I trust you, to see it through, for me…”

It didn’t take long to reach the city and gather some intelligence about Ruta Souban. It was the week leading to the Day of Flowers, a Miran celebration that, in Einekkeh, lasts for a week. And as such, Ajit learned that Souban was holding celebrations for a select guest list of the high, the mighty and the famous, at her Oasis Citadel in the city’s dazzling Quarter of Gold.

It was easy to find the Citadel, fabulously placed as it was on the edge of the plateau with grandstand views of the Kharfai plains before it. And it didn’t take Sennath long to charm his way in (with the judicious sprinkling of a few Birr to oil the wheels). Under the cover of playing music for the guests he scouted the layout: he even turned a confrontation with another musician – whose place he’d taken – into an opportunity to join with this singer and get a sort-of official accreditation to be inside the citadel’s walls! Not only that, but through his stunning looks and talents in seduction, this beautiful young singer, called Aisha Chafiik, quickly became his lover and loyal friend.

In the meantime Ajit was prowling the seedier ends of Einekkeh, in search of the assassin’s favourite play-thing – poison. He didn’t want to have to shoot Ruta, reasoning that a quiet assassination using a poison delivered to her bedchamber by aerosol might be a more sensible approach. Ok, getting in and out without being seen might be the sticking point, but gun-play was definitely a last resort! He found what he wanted, a local poison with a deadly reputation called Fang, and despite the high price of 1000 Birr he came away with what he needed and the wherewithal to build his little dispersal device.

Instead of using Sennath’s access, Ajit decided to bluff his way into the Citadel as a master chef from Zalos. He eventually managed to persuade his way in, making good use of Zalosian language and threats of the Trial of the Icons for the guards who delayed him. Little did Ajit know (thanks to a good use of 3 Darkness Points!) that this phrase was an alert for Ruta that people from the Covenstead had arrived…

He pressed on. With Sennath creating a diversion in the central pavilion, Ajit sneaked into Ruta’s personal quarters and hid the aerosol behind her bed, before he was challenged as he tried to make good his escape.

Ruta’s aide, Vanko, had been tracking Ajit since the guards had reported the use of the codeword, and he was still in Ruta’s personal suite, its windows overlooking the Citadel’s Great Hall below, when Vanko challenged him. Ajit tried to hold up his little deception, with the various use of haughty demands and veiled threats. It worked to a point, until Ruta herself arrived to question him.

Outside Sennath had avoided the guards following his diversion, and now Aisha was playing to calm the guests. But he knew not what was going on upstairs…

Upstairs Ajit was struggling. Ruta wasn’t convinced by his stories and was asking him question after question. By now the invisible poison gas must be seeping into the room from Ruta’s bed chamber and Ajit urgently needed to get away.  Then, as if matters weren’t bad enough already, Ajit glanced through the window down into the Great Hall and saw what was unmistakably the ‘real’ Envoy from the Covenstead striding through the throng!

Sennath finally decided to follow Ajit, and reached the door to Ruta’s suite just before the Zalosian Envoy did. He managed to delay him and his guards, quick thinking to claim he’d been sent to play for this honoured guest. However, it was at that point that Ajit – seeing no other way out of the trap he’d caught himself in – drew his pistol and fired, the Vulcan’s thundering roar shaking the very air. Ruta fell, hurt but alive. Vanko dragged her towards her bedchamber and safety, as the guard opened up. A solid hit almost put Ajit down there and then, but his return fire gut shot the poor guard, who fell bleeding to death.

The sounds of gunfire told Sennath that the game was up. He lashed out, striking the Envoy with his hand fan. It did little damage but gave Ajit the time to fire twice more at Ruta, who – like all of them – was beginning to suffer the deadly wisps of the poison gas. The fourth shot into her still form finally killed her, as Vanko and his wrist blade came for Ajit. In a desperate attempt to escape, Ajit leapt from the window into the maelstrom that was swirling in the hall below. Sennath did the same, evading the guards and fleeing into the gardens outside the hall.

Ajit hauled his battered form from the floor of the hall, blood and bruises covering his body.  There were people all around: guests fleeing the gun-fight; servants standing in shock still holding their plates of Miran worm vol-au-vents and skewered sucker fish; and guards, once in shock but now with a target – Ajit – to focus on.

Guards approached from every angle. Ajit felt the solid grip of furred and clawed hands, and saw the rush of a Nekatra take down the nearest guard. Norsa and his two friends, saved from certain death on the Choral Station by Ajit and his crew, were paying their debts. The guards were no match for the ferocity of Nekatra, and they carried Ajit away from the pursuit. Clambering over the Citadel’s walls Ajit and Sennath escaped, having completed the quest that the mysteriously absent Tayisha had set for them. 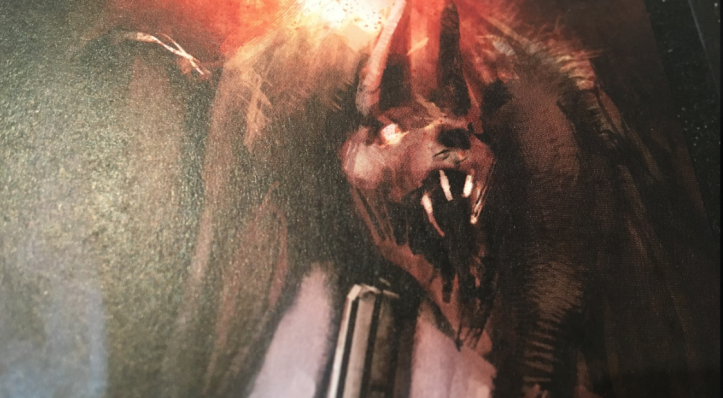 For Norsa’s part, he had recently seen Valdez, here in Einekkeh, and Valdez had agreed to sponsor him (to the tune of 4,000 Birr) to enter the arena as a Gladiator. He had made his name before even fighting his first bout – a free Legion Nekatra, released from his obligations to the Legion and fighting here, in the Einekkeh arena – that was quite the novelty! And hence his invite as a high profile, if less salubrious, guest to Ruta’s celebration. But between the invite and the party Norsa had been betrayed, sabotaged, and suffered a humiliating defeat in the arena – he would never fight as a Gladiator again. But he felt honour-bound to Valdez, and had decided to find him and tell him what had happened. Sennath needed to find Tayisha and so decided to stay in Einekkeh: besides, he had a new girlfriend in Aisha, and they were making a pretty good living as a duet.

So Sennath and Ajit bade their fond farewells, and Ajit fled the moon in search of Valdez and the Spectral Corsair…

Ajit Mehr is played by my son, Morgan, who is at university – hence the story that splits him off from the main group every few months! I’d promised I’d run a game for him as a spin-off, so Ajit doesn’t fall too far behind the others, and my other son Dean (who plays Ozgare in the main campaign) wanted to join. He rolled up Sennath as a one off (although Sennath is a really interesting character and we both love him: maybe Dean will want to play him if Ozgare ever comes to a sticky end!).

This was a short game, just 3 hours one afternoon, but it was a lot of fun. Morgan was very (very, very) keen not to get into a fight, and was quite upset at the thought he was going to lose at the end! It was a real nail-biter – one of those games where it really looks like someone is gonna die, hence leaping out of windows and such like. And even though it was a fire fight, it was the poison that finally finished Ruta off!

Having Norsa and the other Nekatra there to rescue them was narratively ok, as Norsa had been sponsored to fight in the arenas by Valdez in an earlier scenario, and was something of a minor local celeb as a result! That said, I’d already decided that Norsa was going to get beaten up and have his ‘what-should-have-been-stellar’ career cut short. Poor Norsa!

One thing this game did teach me – if I read the rules right then poisons are pretty rubbish.  In the game I ruled on the fly that poisons will kill you if you are Broken by damage from a poison – don’t think this is specified in the rules anywhere. But here’s a lesson for me – take a closer look at the poison rules before the next game and House Rule something if I need to (as an aside I think the explosives / explosions rule might need something similar!).