I hope you enjoyed my quick swish through a few games in the RPG Shorts Number 1 post, so here are a few more:

A SONG OF ICE AND FIRE

Oh yes. This is a game for those, like me, who like to run a campaigns that get complicated. Plots, sub-plots, truths and lies told and backs stabbed. It’s an RPG just begging for betrayal. Great things about the game? The House generation system, where all the players help build the House to which you belong and then develop your House as you play (House Orka, for my campaign, Dornish pirates trying to make good as new nobility). Second, the Intrigue system – combat without blood when you fight with your wits, not your sword (but the outcome can be just as deadly): better than a simple Intimidate or Fast Talk roll… What needs improving? The large scale battle system – works well enough for small skirmishes, but any big scale battle is gonna take you all frigging day… I’ve tried some house rules to improve this, but haven’t found the right balance between great battle feel and slick mechanics yet… That said, we have had some great battles.

But, one hell of a game for those who love the Game of Thrones.

Cool moment?  Ser Amhar Bloodstone’s face when he was manoeuvered into a duel with the Mountain, and his face again when he won and became the toughest knight in all Westeros… 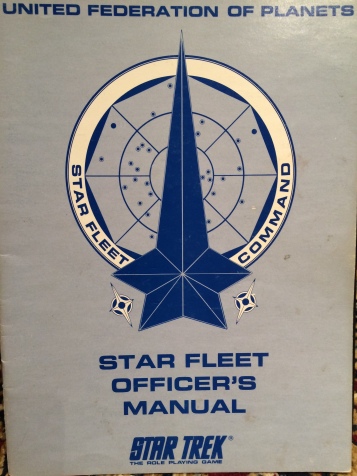 My favourite bit of the Star Trek RPG canon was “The Klingons”, and this would have been the picture here but I can’t find the book… 😦 If you love Star Trek you’ll love the game, and the chance to bring your character through the Academy, to their first ship, then your first Constitution Class posting with that ship with the really cool name (USS Broadsword for me).  Great as the game is, it suffers from the same issue as Traveller – that the character generation system delivers you a brand-new and fresh-faced character, ready for all the adventures the universe has to offer, who’s just come from his 50th birthday party, or his weekly trip to the chiropodist coz of his dodgy back.

But the Klingon campaigns I’ve run have been brilliant. No need to be nice, and remember that promotion isn’t a matter of ability, but a matter of assassinating your superiors.

Funny moment?  My mate, Matthew, calling his Klingon character Khoblarz (not sure he was taking it too seriously…).

“God help you sinner, coz nobody else will…” Judge Judas Iscariot, Brit Cit.

What a great game, if a bit directive in terms of scenarios from the GM’s point of view.  But then, your characters are Judges, they go out and solve crime, and the “go and solve the crime” scenario approach can work really well. Who remembers ‘Hill Street Blues’, the best cop TV series probably ever? Well, the opening of a Judge Dredd scenario was just like roll-call, maybe without the “hey, let’s be careful out there” line. It’s a cracking game, where each Judge has an arrest tag-line, like mine above, and you roll out on your Lawmaster to bring order to the world. The percentile dice rules system feels a bit old-school now (but then, Cthulhu is percentile too and I didn’t complain when I did a short on that!), and the turn system, where you act many times in one turn, could be a bit clunky. But, if you ever read 2000AD as a kid, why wouldn’t you wanna patrol the cities looking for perps?

Great moment?  Running my Sandharvester scenario “Bots? What Bots?”, based loosely on the Dr Who story, “The Robots Of Death”, with the fantastic Tom Baker as the Doctor, at Gamesday in London, 1987.

And sad death: Judge Lawless coming across a samurai and, in two swift rolls, having his head snicked from his shoulders – game over Lawless…  But the player wasn’t alone for long.  This was the last scenario in the campaign and repeated opportunities to defuse a nuke were passed up, so every other Judge (Khedler, McHanon and Fodder) all passed away too… 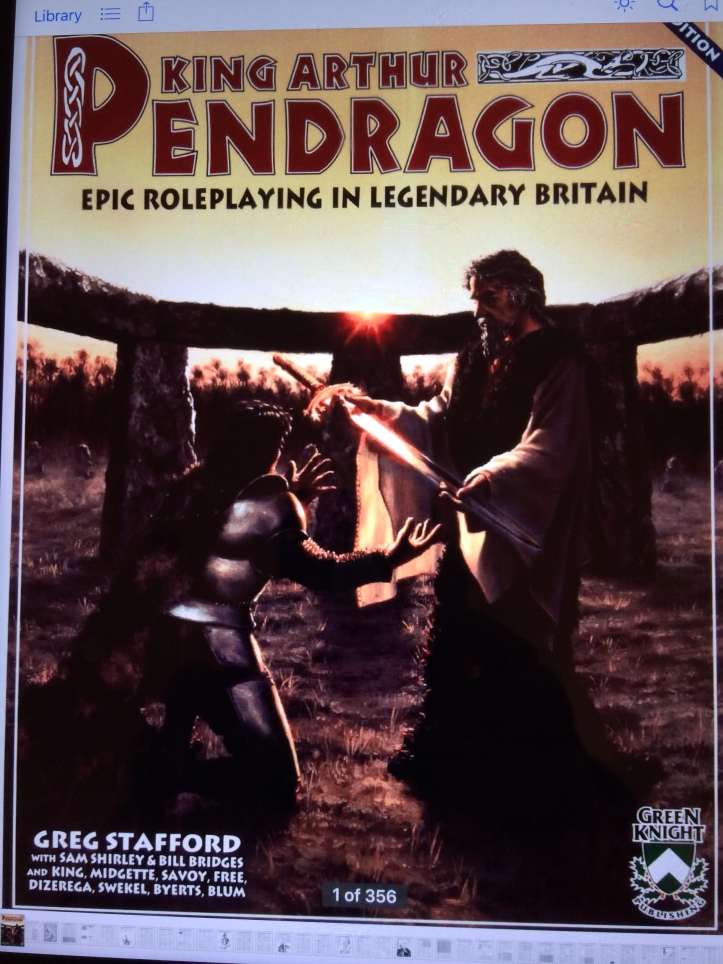 If you want a game that’s genuinely generational, then Pendragon is the game for you.  Set in the dark ages, around the time of Arthur, you get to play through the whole Arthurian period. Magic in the game is a total nightmare: you cast a tiny little spell then spend six months asleep to recover, so we don’t have so much magic in our campaign (and that works just fine). I say there’s not much in-game magic, but Pendragon itself has such magic about it that we’ve been playing this one continual campaign since the 1980s. I’m on a second generation character, Geraint ap Gorthyn, son of my first character Gorthyn ap Ardurr, although others have gone through many more generations over the years. Geraint has risen from the lowliest origins, and is now the High King of all Britons (go go Geraint!), with Arthur as his friend and supporter – cool! The game is d20 based, and has some great mechanics, from attitudes that help drive your behaviour, to a slick and dramatic system for big scale battles, and brilliant rules for year by year generational developments. This does take a bit of player and GM book-keeping, but if you don’t mind that – and want to see your titles, holdings and family power grow before your eyes – then it’s well, well worth the effort. Geraint has been king for over 10 years now, but is getting on a bit: I’m looking forward to his heroic death some time in the near future…

Cool moment?  Gorthyn and his friend Cuchulain, captured and being forced to hand over their first born as security, looking at one another and knowing straight off what to do – drawing swords and crying “you will not take our children!” they took down the enemy noble in his own hall before they were cut down by his bannermen.  But their sacrifice saved their heirs and has gone into our gaming history forever…